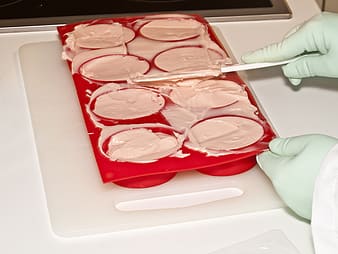 One thing is clear: in order to stop climate change and so that the growing world population has good food available, we not only have to change agriculture but also our eating habits.

For quite some time now, PR experts have set a new trend for this: “Clean Meat”. This term refers to meat that does not come from slaughtered animals and is instead produced in a laboratory using artificial tissue cultivation. Laboratory variants of other animal products such as milk and eggs are currently also being worked on.

Marketing departments and futurologists outdo each other with promises as to which problems lab-grown meat will solve, be it hunger in the Global South, climate change or the suffering of so-called farm animals. But do the promises stand up to a fact check? Or is it just another attempt by the industry to generate profits?

How clean meat is made

Clean Meat is based on the stem cells of an animal. To allow the meat to grow and thrive in the laboratory, scientists isolate cells from farm animals. They supply these with oxygen and nutrients so that they can reproduce and multiply. The cells develop into meat fibres in a bioreactor and can be “harvested” after about four to six weeks.

At the moment, there are some big players who determine the market – all of them young startups with the support of powerful investors:

– Mosa Meat from the Netherlands, established in 2015. Mosa Meat is funded, among others, by Merck KGaA (pharmaceutical company)2 with 5.5 million euros and the Bell Food Group (one of the leading European meat producers and market leader in Switzerland).3

– Aleph Farms from Israel, established in 2017. Cargill ​​​​​5 is also an investor here, as well as the company M-Industrie (a subsidiary is Migros, one of the largest retail chains in Switzerland)6

– SuperMeat, also from Israel, established in 2015. The largest German poultry corporation PHW (including Wiesenhof) has been an investor here since 2018.7

In their public image, the companies attach great importance to sustainability and their supposed contribution to creating a better world. However, there is nothing to suggest that the companies really care. This is because the above list of major players shows that the industry is seamlessly integrated into the global capitalist economic and production system. A great deal of capital flows from established animal industry groups from Germany, among others, into the development of startups.

We should in fact urgently try to move away from the enormously concentrated food production that is involved in the destruction of the livelihoods of small farmers around the world. However, in the lab-grown meat industry, the established power mechanisms ultimately become apparent again: large corporations from the Global North strive to produce food industrially and in an even more efficient manner and thus open up global markets in order to make profits.

Let‘s still take a look at the product. In 2013, the first lab-grown burger was presented; the price was a horrendous 250,000 euros. For 2021, Mosa Meat is forecasting a price of nine euros per burger – but only if the targeted breakthroughs in industrial production are achieved. This is because the costs are currently still the big sticking point; they have to be reduced drastically in order to keep the big promises. In the medium term, the aim is to invest in research in order to compete with animal products that are heavily subsidised in Europe and the USA.8 Huge investments are required for research, development and marketing until mass production could be possible – and even then, it remains to be seen how economical the production will ultimately be.

It is at least questionable whether this can be achieved in the next few years. The price of nine euros mentioned above would clearly represent a luxury product that most people would be excluded from consuming. The huge amount of resources that would have to be invested to develop efficient mass production would therefore be much more appropriately used for socio-ecological transformation.

According to the company, the meat from the laboratory uses up to 99 per cent less land and water and causes up to 96 per cent fewer greenhouse gas emissions than conventional meat.8b These are statistics from the manufacturer, so take it with a grain of salt. On the other hand, some scientific assessments are less optimistic about the environmental impact.8b It is not difficult to imagine that in-vitro meat could potentially be less harmful to the environment than animal farming, given the enormous environmental damage for which the animal industry is responsible. However, the same applies here again: there is a very long tradition of ecological plant production which works harmoniously with the regional and seasonal characteristics of ecosystems and can counteract environmental degradation. There is therefore no need for lab-grown meat factories for the sake of the environment.

According to the company, lab-grown meat is healthier than conventional meat because it can be produced free of antibiotics, pathogens and other contaminants. In fact, some aspects of the animal industry that are highly problematic from a health point of view are eliminated from lab-grown meat. However, it is very hard to predict how resistant the huge production facilities that some companies have in mind will be in practice against pathogens.

In addition, since the meat cells are identical to those found in “real“ animals, the health effects are the same. This means that excessive consumption results in an increased risk of obesity and cardiovascular disease.9 Yet again, the following can be summarised here: there is a potential advantage over real meat, but these advantages can also be achieved with significantly less effort using plant-based foods.

It is obvious that animal exploitation could be reduced enormously through the production of lab-grown meat. According to individual researchers, 200 cattle would be enough for the global beef requirement – 1.5 billion cattle are currently being killed for this purpose. However, it cannot be forseen to what extent this is actually realistic and will be achieved in practice. It would also be conceivable, for example, that lab-grown meat merely complements the existing range or remains an expensive luxury product. Of course, zero cattle should suffer for human consumption.

In any case, it is important to bear in mind that the production process regularly relies on fresh muscle tissue and continuously on growth serum.

The growth serum is usually obtained from the heart of a calf embryo, for which the calves and sometimes the mother cow are slaughtered.9b Some companies state that they have replaced the calf serum with an algae nutrient solution.10 It also remains to be seen whether this alternative will prevail.

The fresh muscle tissue, however, still has to be removed from live animals, which in always exposes the animals to stress and pain. Plant production, on the other hand, manages without direct animal suffering – depending on the production method, plant production even manages completely without the use of animal products (organic vegan agriculture) or is coupled with extensive animal farming (e.g. bio-dynamic agriculture).

As we have found, lab-grown meat is superior to conventional meat in many ways. It could help to significantly reduce the conventional animal industry.

And according to market research studies, there is also potential demand for lab-grown meat: one study, for example, predicts that “by 2040, […] only 40 per cent of meat products consumed will come from animals”.11 If in 2005 it was 94 per cent of Europeans who were extremely sceptical of lab-grown meat, a study from 2018 is said to show that 66 per cent of those surveyed would be willing to at least try it.12