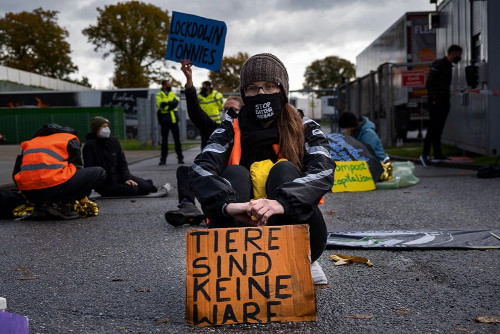 A wide range of people with various incentives and needs will take part in the planned mass action against the PHW Group. This makes it all the more important that everyone feels comfortable about some common basic assumptions which represent as many different expectations as possible. In this way, individual needs can be taken into account in spite of a large group size. This action consensus was therefore developed in a collective process of the alliance. It should be discussed in the respective contact groups and applies to the joint mass action as well as autonomous actions that want to support us in conjunction with this action.

The purpose of this action is to block a big profiteer and player in the animal industry as well as to draw attention to the wrongs caused and reproduced by them. PHW represents an industry that benefits significantly from the exploitation of people, other animals, the destruction of the environment and global inequality and that is in no way sustainable. Our protest also includes forms of civil disobedience: the mass action at PHW is intended to temporarily halt operations with a blockade. As a cross-movement association of leftist groups, we see this as an expression of our collective autonomy and our resistance against the oppressive, capitalist and life-taking animal industry system.

The safety of the participating activists, workers, animals and everyone involved is our top priority. There should be no hostility towards people who oppose our action (such as counter-demonstrators). We want to avoid escalations and not put anyone in danger.

The aim of the campaign is to avoid damage to infrastructure or other constructions. Barriers – structural or otherwise – will not be an obstacle for us and, if necessary, will be overcome.

We are aware that social discrimination and power structures can also affect our movement. We do not want to reproduce these unreflectively through our thinking and behaviour, but rather actively work against them by adopting a self-critical and reflective fundamental attitude. Accordingly, we do not tolerate any misanthropic or discriminatory statements or actions during the demonstration. We want an action that is accessible for many and conveys an image of diversity and openness. We also want to show consideration towards the fact that some people are more severely affected by (state) repression and to stand in solidarity with those afflicted by it. We strive for a hierarchy-free relationship with one another and make decisions based on grassroots democracy and consensus.

We fight together and do not degrade one another.

We also stand in solidarity with those who are oppressed in the animal industry system and/or are affected by its ecological destruction. Many workers in the animal industry are systematically exploited and are victims of casualisation. We do not see them as adversaries but rather as addressees and potential allies of our protest.

We consider it our duty to counter the spread of the Covid-19 virus and therefore adhere to a hygiene concept. (You can soon find the hygiene concept on our website.) We observe social distancing, provide disinfectants for all participants and always wear suitable masks and change them when necessary.