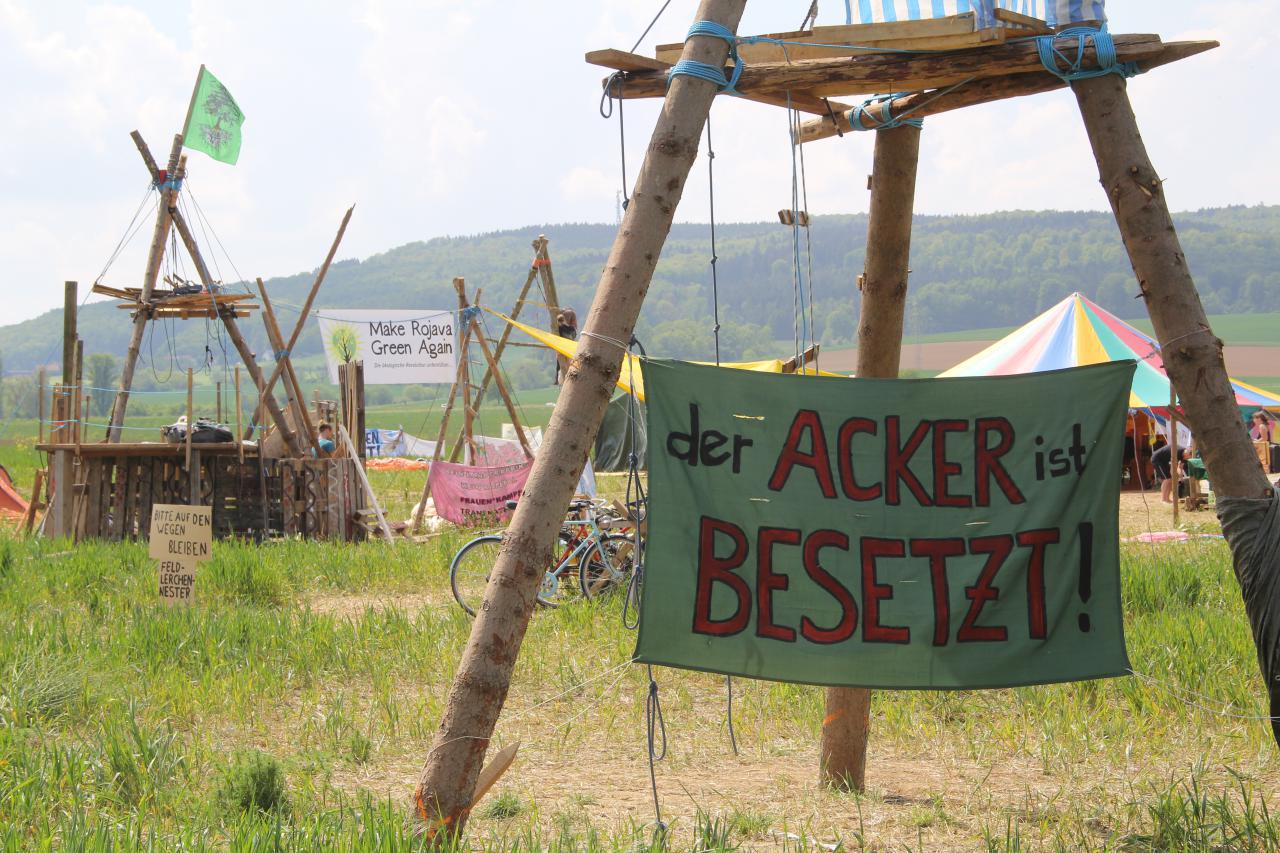 We also congratulate the occupation of soil on their 1st birthday and document their anniversary text here.

On 04 May 2020 the occupation of soil in Neu-Eichenberg in Nordhessen will be celebrated for the first time! Exactly one year ago, activists occupied the field in order to get in the way of the construction of a huge logistics area. For a long time it seemed as if the privatisation and sealing of the 80 hectares of arable land could no longer be prevented. The investor Dietz AG had already signed a preliminary contract with the mayor and municipal committees were more concerned with the colour of the new logistics halls than with the future of the municipality.

Our experience shows: Resistance is worthwhile!

Despite the diverse and creative activities of the „Bürgerinitiative für ein lebenswertes Neu-Eichenberg”, the municipal council stuck to its plan. As a result, some people from the student environment of the Eco-agrar University in Witzenhausen decided to support the local resistance and take it to a new level by occupying the site. So they set out in the morning drizzle with a circus tent and field kitchen to organize a ” Ackerfest” – and then simply stay. After the first weekend, there was hope of surviving at least a week, despite the acute danger of eviction. But then came the next week, and another, and another, and in the meantime the occupation has lasted a full year. One year of occupation of the fields!

Right from the start, a lot of energy was put into building up infrastructure and social structures. Tents were put up and taken down, dishes were washed, construction carts were pulled up and around, there was plenary assembly, conflicts were fought or carried away, compost toilets, tripods and greenhouses were built and a lot of delicious food was cooked. Particularly impressive is the wooden tower, about 10 metres high, from which the entire 80 hectares can be overlooked. Thus the occupation changed with the course of the seasons and the people living on site. During all this time, a lot of heart and soul was put into keeping the occupation going.

The field is a social place of experimentation and lived utopias, where we strive for a self-organized, non-hierarchical coexistence. Already in the first summer we planted vegetables and organized a diverse cultural program with lectures, workshops, film screenings and concerts.

And the occupation as an investment risk is showing its effects: the investor mentioned at the beginning of this article withdrew at the beginning of the year because the protest had made the location “enormously less attractive” for him. We are also celebrating our first successes in terms of local politics: at the beginning of 2020, the municipal council decided to put a stop to planning for at least six months, thus providing scope to consider alternatives to the logistics area. These first partial successes were only possible thanks to strong local resistance and supraregional networking.

The struggle in the field does not take place in isolation! The occupation is largely supported by local residents and sees itself as part of the climate justice movement. Beyond Nordhessen we show solidarity with other emmancipatory initiatives, like the occupations in the Dannenröder Wald or Hambacher Forst. We also feel connected to the worldwide small farmers’ movement “La Via Campesina”, which fights against colonial exploitation and for food sovereignty, especially in the global south. We are convinced that in order to achieve climate justice and a good life for all, we must overcome the prevailing capitalist conditions. The struggle for food sovereignty is also taking place here in Neu-Eichenberg. One step in this direction is that the fertile soil will remain a common good and be used for local food supply.

With the occupation we also draw attention to the threatening sealing of arable land: Every day 58 hectares are used in Germany – this means that the sealed area has doubled in the last 60 years alone! Soils have many important functions. For example, by building up humus in the soil, carbon dioxide can be removed from the atmosphere and thus the worsening climate crisis can be mitigated. In addition, soil serves as a buffer during heavy rainfall events, as a water reservoir for dry periods and as a habitat for many organisms. The special soil quality of our arable land is also reflected in the fact that in the drought summers of recent years there has been relatively little loss of yield. Such fertile soils hold great social potential and it is high time that more political attention was paid to soil protection.

But what will happen to our field in Neu-Eichenberg? Currently, two further concepts are being discussed in addition to the logistics area, which is still not finally off the table:

A company that sells software for photovoltaic systems has come up with the idea of building a solar park on a large part of the area. This proposal also provides for a commercial area on 15 hectares – including soil sealing. Not only would the fertile arable land no longer be used for agricultural purposes, but the land would also be privatized and thus removed from any democratic control. Green capitalism is no alternative!

In contrast, the concept of the initiative “Land creates future”, in which students of agricultural sciences from Witzenhausen have joined forces with practitioners from agriculture and horticulture to design an agro-ecological alternative for the 80 hectares.

With the participation of the residents of Neu-Eichenberg, the initiative would like to shape the concrete implementation of a regenerative agriculture with further cooperation partners in the coming period. “Land creates future” pursues the goal of an integrated concept with municipal energy supply, communal living in the buildings of the adjoining domain and local food production in the centre. Its vision is to establish a “practice, demonstration and research location in order to advance rural developments and systems of regenerative agriculture (…) and to make them sustainable”.

We too feel connected to the principles of agroecology. This year, a working group has come together on the occupation, which now already grows disobedient vegetables. With this we contribute a part to our own supply and want to give away vegetables to our neighbours from Neu-Eichenberg. In addition, a few people from the region have already marked out small plots of land on our recollectivised field, which they now cultivate on their own.

All people from near and far are welcome to come by and help with the gardening. Already during the first soil cultivation a neighbouring farmer helped us – this way new exchange is created and the resistance grows.

More information about the occupation of the fields can be found here: