How we made the hotspot of the meat corporations the center of our protests in the late summer of 2022 – impressions from the camp and the days of action of the alliance Together against the animal industry.

From September 23 to 27, we, the alliance Together against the animal industry, organized an action camp in Quakenbrück in western Lower Saxony and called for days of action in and around the Oldenburg region. Our goal: to set a strong signal with diverse protests against the destructive, exploitative animal industry and for a socially just, ecological agricultural turnaround. Among other things, we blocked a Tönnies slaughterhouse in Badbergen for over 13 hours.

Hello Quakenbrück! Our action camp in the hotspot of the animal industry

After months of planning, mobilization and networking and several days of setup, we opened our action camp on Friday, September 23, 2022, directly behind the train station in Quakenbrück – a small town in the district of Osnabrück with about 13,000 inhabitants. In the middle of the region where most of the animal industry’s operations are concentrated in Germany – from feed and fattening plants to slaughterhouses and sausage factories – we set up our tents and invited activists, residents, farmers and all interested people to visit us and participate in our numerous protests. Exactly there, where the huge profiteers of the industry are located: the big meat companies, first and foremost PHW (Wiesenhof), Vion, Tönnies and Westfleisch.

The camp was supposed to be a place of exchange, networking and debate on the topics of agriculture, animal husbandry, climate justice, capitalism, neo-colonialism and working conditions in the meat industry. There was a colorful program of workshops and lectures as well as spaces to get into conversation, discuss ideas and prepare together for actions. In addition, we as an alliance also called on other groups, organizations and people to participate in our days of action with their own protests. And we were not disappointed – on the morning of our first day of action Animal Rebellion drew attention to the disastrous consequences of the dairy industry with a great action.

The dairy industry is a significant part of the brutal animal industry system, which is based on animal suffering, exploitation and destruction and fuels the climate crisis. This must finally come to an end! To bring these injustices into focus and send a clear signal for an exit from the dairy industry, Animal Rebellion Germany blocked the large-scale dairy Ammerland in Oldenburg, a key player in the industry, on September 23, 2022 as part of our Days of Action. For several hours activists blocked the access to the dairy with their bodies, some chained or glued themselves to the access gate or the road in front of it. Other activists climbed onto the roof of the dairy and decorated it with a banner reading “BRENNPUNKT OLDENBURG – TIERINDUSTRIE BEENDEN”. (“HOTSPOT OLDENBURG – SHUT DOWN ANIMAL INDUSTRY”)

One struggle, one fight! On September 23, 2022, another Global Climate Strike by Fridays for Future also took place around the world. The impact of the animal industry on the climate crisis is enormous. It causes immense amounts of greenhouse gases and consumes an incredible amount of land and resources, including through the cultivation of animal feed. Our demand for an end to the animal industry is therefore an indispensable part of a climate demo – and an elementary component on the way to more climate justice. Thus, of course, we were also at the start of Fridays for Future and demonstrated together with about 2500 people in Oldenburg for a change of system. In our speech in front of the Lower Saxony Chamber of Agriculture, we made it clear once again that the end of the animal industry is indispensable for achieving important climate goals.

Shut down Tierindustrie – Protest in Vechta

On September 24, 2022, we then started our own demo and marched with about 220 people through the city center of Vechta. With big banners, flags, speeches, music, drums and a die-in we brought our message clearly to the streets and loudly demanded a socially just exit from the animal industry and a plant-based, ecological agricultural turnaround.

After this successful demo, some activists got creative in the evening – and painted banners for an action that should start the next day.

According to its own information, the Agravis feed plant at Oldenburg’s port of transshipment produces up to 850 tons of compound feed daily. This makes the company part of a highly inefficient, climate-damaging and exploitative industry. For the cultivation of animal feed, an incredible amount of land is needed, habitats are destroyed, greenhouse gases are released and, for example, indigenous people in the Amazon rainforest are displaced. As a protest against this destruction and the suffering caused and promoted by feed production, on Sunday, September 25, 2022, several activists climbed onto the Agravis feed plant and attached two banners to its roof. On them was written “DON’T FEED THE CLIMATE CRISIS” and “STOP ANIMAL INDUSTRY.” Besides this successful banner drop, other activists also chalked our demands on the street in front of the feed mill and demanded a change in the food system in a vigil with loud chants and drums.

At the same time, preparations for the next day started in the camp – with action training, legal aid workshop and a final action plenary, we got ready for another disobedient action with a well-known target: the meat giant Tönnies.

Around four o’clock in the morning on September 26th, we set off with almost 100 activists from our camp in Quakenbrück to the Tönnies slaughterhouse in Badbergen. What Tönnies calls a “cattle competence center” on its own website is in fact one of the largest cattle slaughterhouses in Europe – a cruel place where about 500 cattle are slaughtered every day. Only in 2020, Tönnies reopened the site in Badbergen after renovations in order to be able to generate profit there even more efficiently at the expense of animals, workers* and the climate. A significant place to draw attention to the terrible effects of the meat industry. Divided into three groups, we blocked all three entrances of the slaughterhouse and thus paralyzed the normal operation of the site! Lock-ons were also used, one activist attached himself to a truck standing in front of the access road, two others climbed onto the roof of the truck. We also got on the roof of the slaughterhouse – and dropped a huge banner with the inscription “SHUT DOWN ANIMAL INDUSTRY”. Near the blockade points, a registered vigil took place at the same time, in which we also drew attention to our demands.

The blockade lasted a total of over 13 hours and generated a lot of attention in the surrounding area and in the press. A dpa report was picked up by numerous media, the blockade was seen on TV news and there were several longer articles. For us, a complete success!

In Germany, almost 800 million animals are slaughtered every year. At its main site in Rheda-Wiedenbrück alone, Tönnies slaughters up to 25,000 pigs every day. The company is one of the big players in the meat industry and in recent years, in addition to the daily crimes against animals, people and the climate, has also been in the public eye with other negative headlines: catastrophic working conditions, illegal disposal of slaughterhouse waste, recruitment of vulnerable refugees from Ukraine directly at the border – the list is long! We want the public to continue to look at the criminal practices of the animal industry, that meat giants like Tönnies, Vion, PHW and Westfleisch do not simply get away with their exploitative and destructive actions, and that the end of the animal industry is finally heralded!

Already when we arrived at the slaughterhouse in Badbergen, the police was present, but could not prevent our blockades! The eviction dragged on throughout the day and only around 9 pm the last people were removed. The police tried for the most part unsuccessfully to establish the identity of the activists; some were also taken into custody. Except for two people who had climbed onto the roof of the slaughterhouse, everyone was released by the evening. These two activists had to spend the night in the detention center in Osnabrück – and reported, among other things, that they received no blanket and no vegan or vegetarian food. Also during the eviction from the roof there had been violent situations on the part of the police. The day after the action, a group of about 20 people showed solidarity with the activists in front of the local court in Osnabrück and demanded their immediate release. Stop slaughter, protect climate, fight for justice – these are not crimes! The real crimes happen daily unpunished in slaughterhouses, feed mills, cutting plants and in countries of the global south, where habitats are destroyed and people are displaced – so that Tönnies and Co. can generate proper profits in this country.

After a summary trial was rejected and the activists were threatened with a longer detention, the two gave their particulars and were released in the late afternoon. Of course, we continue to stand shoulder to shoulder with them and support them in solidarity in the event of further repression. 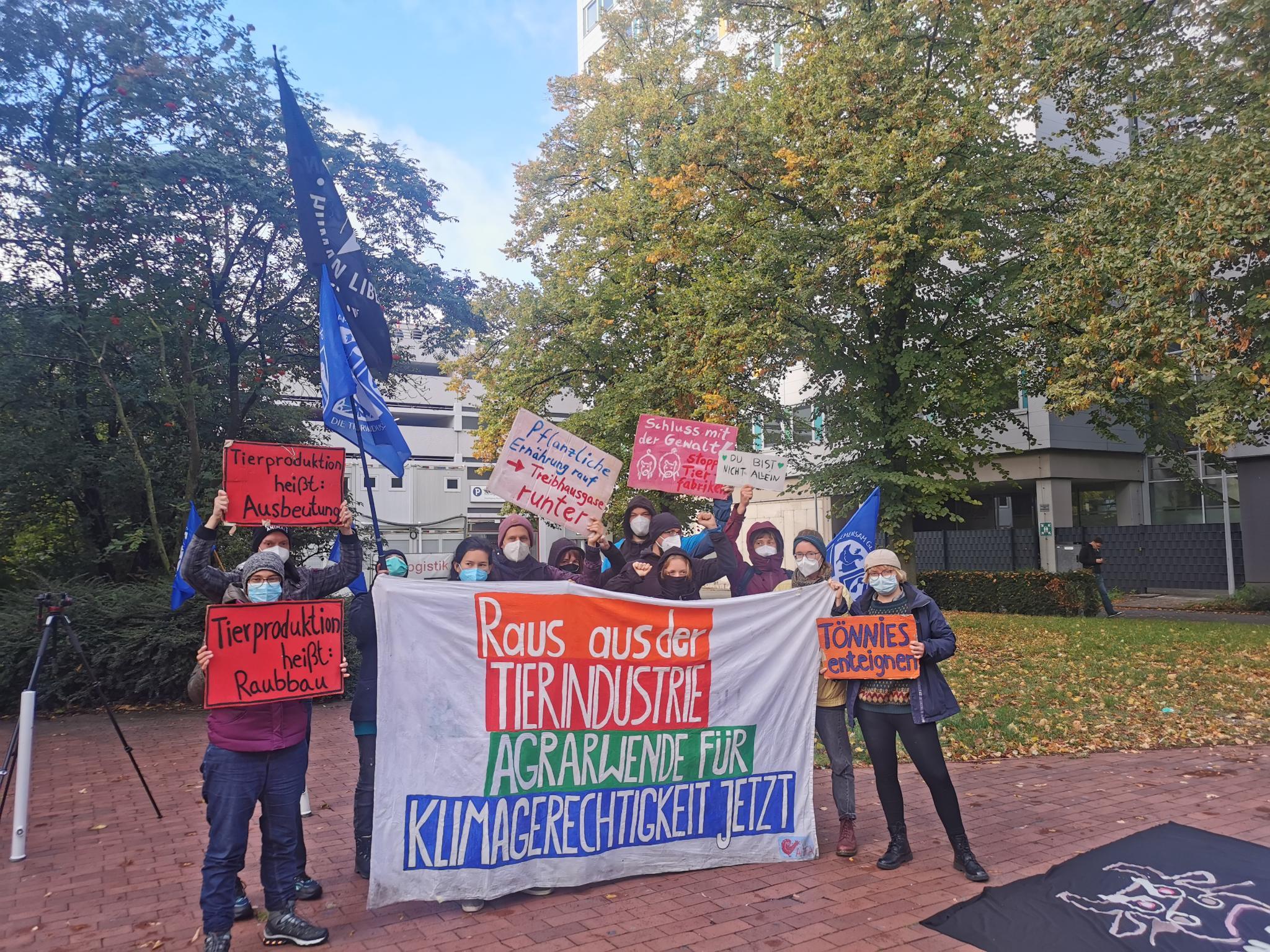 With all these exciting actions, one must not forget the program points in the camp! From Friday noon to Tuesday evening, people could participate in workshops there and listen to lectures or get into conversation with each other. For example, on Friday evening there was a panel discussion on the topic of “Transformation of livestock farming in the Oldenburger Münsterland” with representatives of Gemeinsam gegen die Tierindustrie, Aktion Agrar and the Arbeitsgemeinschaft bäuerliche Landwirtschaft. Other workshop topics were for example “Dealing with emotional stress through activism” or “Small group actions”. We also organized several public camp tours, where we showed interested people our camp infrastructure and explained our work. Our offer was used by a wide variety of people: In addition to activists, some media representatives as well as interested residents and farmers came and visited the camp. Our self-organized Küfa provided warm, varied and vegan food every day.

We were here, we were loud. Whether in Quakenbrück, Oldenburg, Vechta or Badbergen – in the region in and around Oldenburger Münsterland we made sure that our demands could not be ignored. With versatile, creative actions, with courage and determination, we opposed a system that is not sustainable.

The animal industry is a major contributor to numerous global social and environmental crises – it fuels climate change, promotes neocolonial exploitation, is responsible for billions of animal suffering and deaths, consumes huge amounts of fossil energy, and is a highly inefficient food production system. With our days of action, we made these grievances more visible, built pressure and reached people through conversations, actions and articles in the media.

Thank you to everyone who supported us. Whether in the camp, in the organization or in the actions, we are very happy about the wonderful support. Together we continue! Together for more justice! Together against the animal industry! ♥