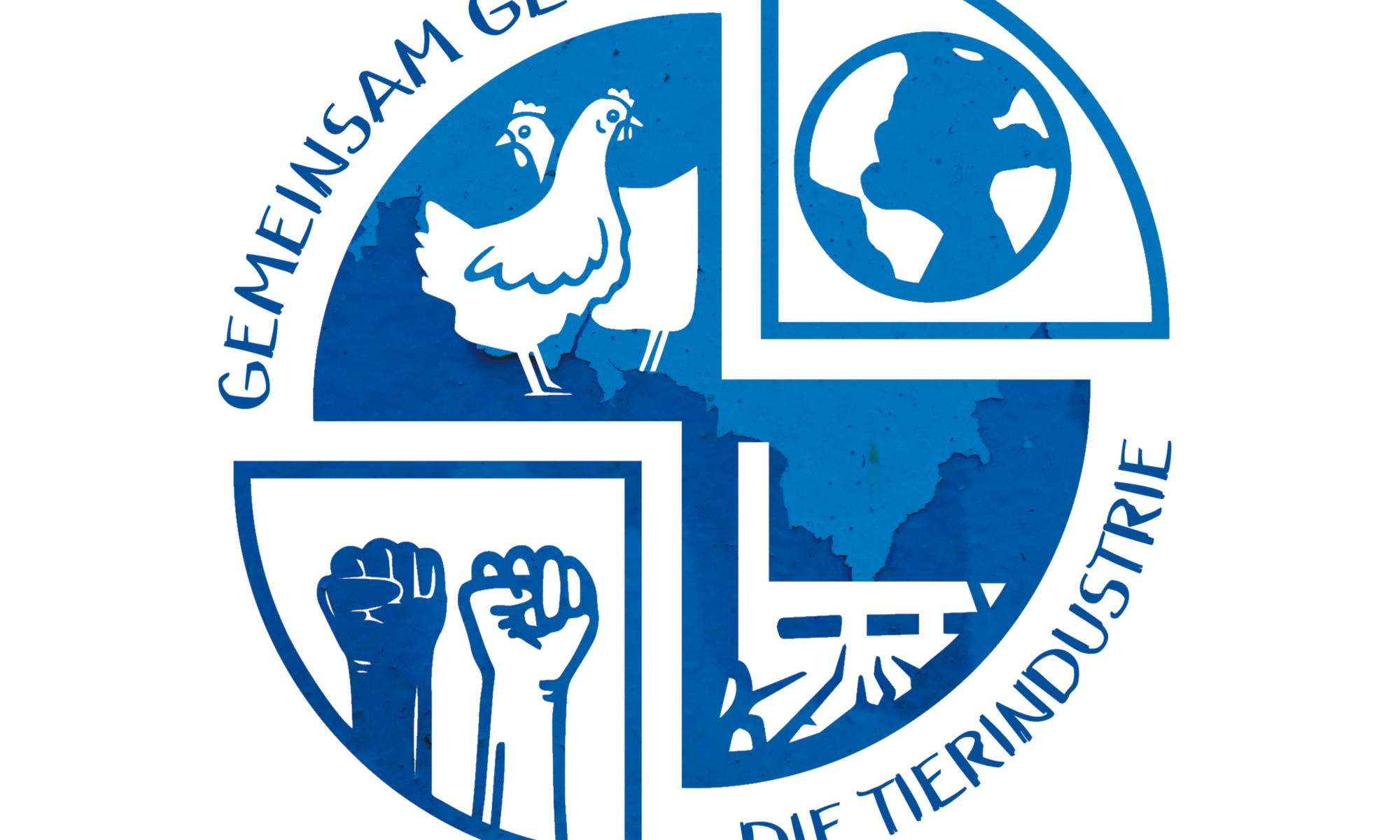 Climate change is advancing at an alarming rate, the Amazon rainforest is burning continuously, the workers in the animal factories, slaughterhouses and meat processing plants have to work under inhumane conditions and undercover research in animal factories reveals horrific conditions time and again. With corona, a worldwide pandemic is raging, which as a zoonotic disease has its origin in the destruction of our natural foundations of life. And the animal industry responsible for this is achieving record sales and growth rates – this is a scandal!

We want to counter this. In July, we will demonstrate in Lower Saxony with an action camp for agriculture that is not based on the exploitation of people, other animals and nature. We will also protest protest against the animal industry with a mass action targeted at the PHW-Wiesenhof Group, the largest corporation in the German poultry industry.

Background on the subject, our demands and the alliance:

The problem: the animal industry

The animal industry, which is dominated in this country by large corporations such as Tönnies Holding, Vion Food, Westfleisch and the PHW Group, is a significant contributor to climate change. The cultivation of animal feed leads to the clearing of tropical forests, draining of wetlands, erosion and desertification. Soya bean cultivation, for example, often takes place in monocultures of genetically modified plants and is associated with the mass use of pesticides and mineral fertilisers. The consumption of feed by animals creates further greenhouse gases and enormous amounts of manure. In many places, ecosystems are no longer able to absorb the spread manure; this results in contaminated ground and surface water. The smell and health risk of multi-resistant germs are a particular burden for the local population. The animal industry is also a huge waste in terms of water resources.

The animal industry causes immense animal suffering. In order to maximise profits, the animals are degraded to commodities, resources and production units. An increasing amount of extensive breeding is carried out so that they produce more and more meat, eggs or milk in the shortest possible time. Keeping animals in confined spaces increases the rate at which (infectious) diseases are spread. To avoid this, medication such as antibiotics is administered as a precaution in many locations – this results in the spread of multi-resistant germs. The repeated promises of the animal industry, such as “species-appropriate” conditions and “humane” slaughter, only conceal the suffering of the animals.

The animal industry relies on extreme exploitation of the workers. In animal breeding, slaughterhouses or meat processing plants, they have to carry out extremely physically and mentally demanding work. Most workers are recruited from Southeastern and Eastern Europe with dubious promises so that they slave away as low-wage and second-class people for the profits of the meat companies. The law on the abolition of work contracts passed at the end of 2020 is a first counteraction against an exploitation regime based on wage dumping, disenfranchisement and piecework. However, the exploitation of precarious employment has not yet come to a quick end.

Every ninth person worldwide suffers from hunger. In many parts of the world, the animal industry increases the price of staple foods and access to land. In this way, it contributes to hunger in a world where there is actually enough food for everyone. In the Global South, the animal industry robs small farmers of their livelihoods through aggressive expansion – so-called land grabbing is an important part of the neo-colonial world order. Even in Germany, small farmers suffer from the practices of the animal industry: among other things, the massive expansion policy and cost pressures contribute to an ever increasing concentration of capital.

The animal industry favours the development and spread of zoonotic diseases such as COVID-19. The destruction of functioning ecosystems drives away wild animals and exposes them to enormous stress. Penetration into their habitats as well as hunting and trade in these animals increase the transmission of infectious diseases to humans. Keeping a large number of animals in a confined space and under miserable hygienic conditions, which is prevalent in the animal industry, results in a high health risk as well as physical and psychological stress. Diseases can spread more easily and can also be passed on to workers.

The animal industry is a product of modern capitalism, in which maximising profit is paramount. It is based on the fact that few people own a lot of land and means of production and can therefore exploit people, other animals and nature. The German animal industry, especially corporations like PHW, has enormous economic and political power. It makes billions annually and is subsidised by the state, which enables it to generate even greater profits. In addition, the animal industry exerts political influence on state institutions and parties through an extensive network of associations such as the German Farmers’ Association (Deutscher Bauernverband) and the media. And the state is happy to assist: despite – or perhaps because of – regular (bogus) reforms, it supports the current system.

We’ve had enough – let us join together and be disobedient!

We will no longer accept that! Neither corporations nor governments will change this ruthless exploitation system, so it is down to us – where injustice is accepted, resistance becomes a duty!

We are calling on you to helps us strike a blow against the animal industry where they are most vulnerable. Citizens’ initiatives, the climate justice movement, the animal rights and animal liberation movement, trade unionists, farmers and agricultural policy associations are already opposing the business of the milk, egg and meat industries. It is time for us to come together and combine our collective firepower. We are calling on everyone who is tired of this system to take action. Regardless of whether it is with demonstrations, blockades or creative actions, there should be a place for everything. With a major action of civil disobedience, we will deliberately be breaking the rules. If you want to participate in the mass action, arrive by Wednesday at the latest.

Our action target: the PHW Group

The target of our campaign is the PHW Group. As the largest German poultry breeder and processor, PHW is a key player in the German animal industry. With its brands Wiesenhof and Bruzzzler, PHW products can be found at many shop counters. Wiesenhof is also well-known as the sponsor of Werder Bremen football club.

PHW has its headquarters and important production facilities, such as a feed mill, in Rechterfeld in Lower Saxony. In the heart of the Oldenburger Münsterland, there are many different and important production areas of PHW in close proximity to one another: the main headquarters, a large hatchery, a feed mill and several fattening facilities. We will be there, and we will be resisting PHW. Help us to make our resistance clear and visible!

Our demand: stop the animal industry!

With our camp, we will demand:

The abolition of the animal industry and the closure of all facilities!

We will go where animal suffering and climate change are happening: to PHW in Rechterfeld. There, we will demand the expropriation of PHW and the conversion of the business to ecologically sustainable and solidarity-based plant production facilities under the self-administration of the workers. PHW ade!

The PHW Group will only be the beginning. We will be calling for a halt on the construction of all animal production facilities in Germany and an immediate stop on animal feed imports from the Global South. And we are calling for an immediate solidarity-based structural change programme financed by the assets of the PHW Group and all other previous profiteers for regions that have so far been dominated by the animal industry. We want good and fair jobs under the control of workers and small farmers!

We are calling for the abolition of the animal industry as part of a comprehensive agricultural turnaround towards solidarity-based, ecological production and organisation that is neither at the expense of sentient beings nor driven by profit. Let us resist climate injustice and stand in solidarity with all who are affected by the climate crisis! Let us end the exploitation of workers together! Let us fight together against the exploitation and ruthless destruction of our livelihoods!

For a world without hunger and poverty! Overcome colonial traditions! For overcoming the capitalist system!

Determined and diverse against PHW

From 12th to 17th July 2021, together with many other people, we will bring PHW operations in Rechterfeld to a standstill in a civil disobedience campaign! Planning is in full swing. Together, we will send a creative, diverse and determined message. Regardless of whether you have protested before, whether this is your first time on the street, whether you prefer fast-paced situations or whether you prefer to work behind the scenes, everyone can take part in the campaign! Together, we will stop PHW!

Alliance Together Against the Animal Industry –
join in!

We are the alliance “Gemeinsam gegen die Tierindustrie”. We came together in July 2019 at an activist gathering. Our struggle against the animal industry unites us. But we are concerned about more: our struggle is part of the comprehensive change needed for a better world for everyone.

We have zero tolerance for any form of racism, nationalism, anti-Semitism, sexism and other forms of discrimination. You can read what we stand for here.

The health of everyone involved is important to us. Our planning will always take the current pandemic situation into account, and we will act responsibly both during the camp and the campaign and implement appropriate hygiene regulations in order to minimise the risk of infection.

We are calling on you to participate in the preparation of the camp and action, either as a group or an individual! We get together regularly (currently online) at alliance meetings to organise. There is much to do! Write to us if you also want to participate: mail (at) gemeinsam-gegen-die-tierindustrie.de

You can find the right PGP key for email encryption here.

Tell your friends and colleagues! Keep up to date, come to the camp and support the mass action!

Information about the camp can be found here.