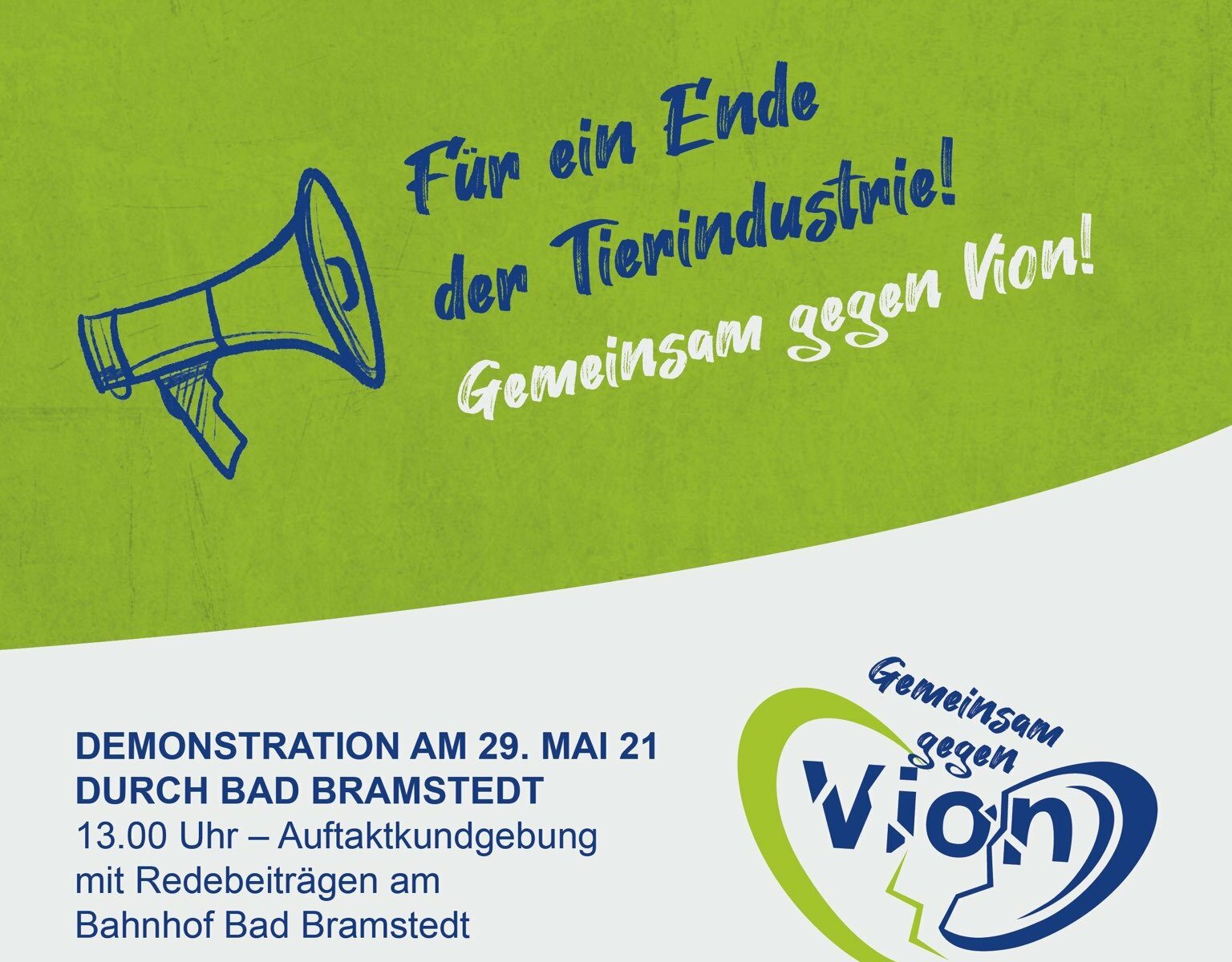 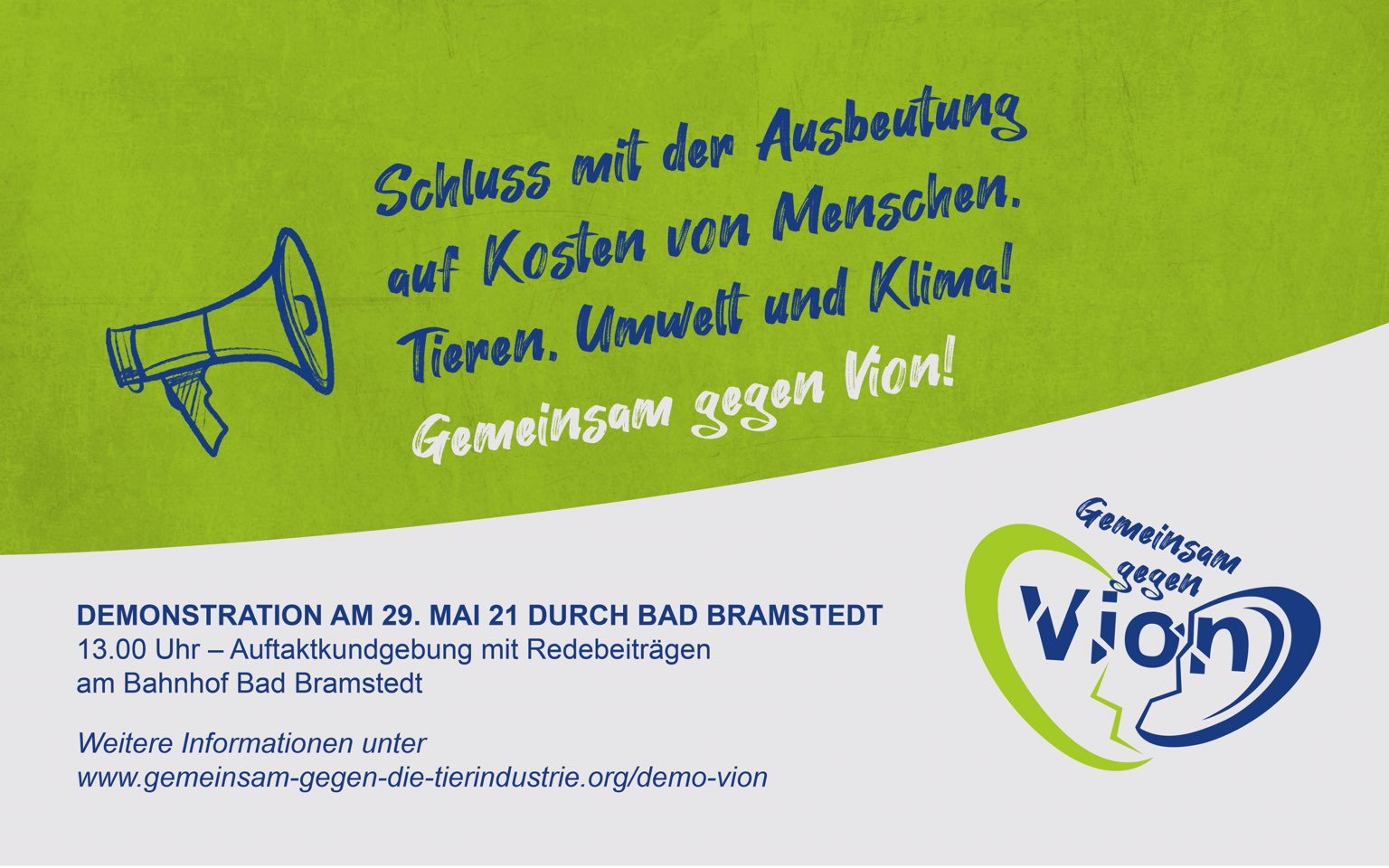 End the exploitation of people, animals, the environment and the climate!

On May 29th we will protest in Bad Bramstedt (near Hamburg) against the meat company VION and the animal industry. We are committed to a socially just and ecological food production that does not focus on the profits from big meat companys and slaughterhouses. We are against the degrading working conditions in the slaughterhouses and meat factories, the limitless exploitation of animals and the irresponsible use of natural resources.

The German-Dutch meat company VION has an annual turnover of more than 5 billion euros by slaughtering cows and pigs. Bad Bramstedt Vion slaughters 3.200 cows from Schleswig-Holstein, Niedersachsen and Mecklenburg-Vorpommern for the German market and international export. VION has long been criticized for the catastrophic working conditions of employed workers. Even after the huge corona outbreak in May 2020 the company cared little about the infection and health protection of “its” employees: in Germany there have been at least nine further outbreaks of the corona virus at VION locations since then.

With our protest we are particularly directed against the exploitation and killing of animals and against a social order based on profit maximization, competition and interpersonal coldness. Slaughterhouses are a place for the rationalized killing of cows, pigs, chickens or other animals. This shows symbolicly how we treat animals. In piecework, animals are slaughtered that are bred to a maximum slaughter weight in the shortest possible amount of time. For corporations like VION, animals are not sentient individuals who have a right to their lives, but a resource for their billion-dollar business.

At the same time, more and more people are confronted with the threatening effects of climate change. The animal industry contributes significantly to the worsening of the climate crisis through emissions from animal farming and the use of rainforest areas for animal feed production, as studies, among others by the UN, have repeatedly shown. The cultivation of feed in monocultures is destroying entire regions, especially in the global south, in which only a few animal and plant species can live. If we want to stop the loss of biological diversity and ecologically sensitive habitats, we have to put a stop to the meat companies and their lobby groups.

So come to Bad Bramstedt on May 29th. Let us work together to overcome the animal industry based on exploitation, violence and the destruction of nature. Let’s work together to ensure that the VION slaughterhouses are closed for good.

We expect up to 250 participants for the demo. Due to the tense situation caused by the Corona pandemic, we have prepared a hygiene concept and are coordinating it with the district health office. We expect all participants to adhere to the following requirements (as of 11.05.2021).

During the entire demonstration, the 1.5 metre distance rule will apply. For orientation purposes, standing areas will be marked with street chalk on the square of the kick-off rally. We ask that no more than 8 people walk side by side in a row during the demonstration. The spacing rules also apply to people of the same household, with the exception of carers e.g. of children and young people.

Please do not forget your masks. Wearing a medical mask (surgical masks, FFP2 masks) is a prerequisite for participating in the demo.
The Demoorga will provide hand and surface disinfectants. This can be used to clean demo materials, for example.

We also ask you to take care of distance rules and mouth-nose protection when arriving and departing. Please also make sure that you move in small groups on your way to and from the demo in order to avoid crowding.

We also call on you to take a rapid test in a test centre or a self-test before the demo in order to keep the risk of infection as low as possible.